The Arab Academy for Science, Technology and Maritime Transport Sharjah Branch launches first cartoon character for the maritime sector in the UAE 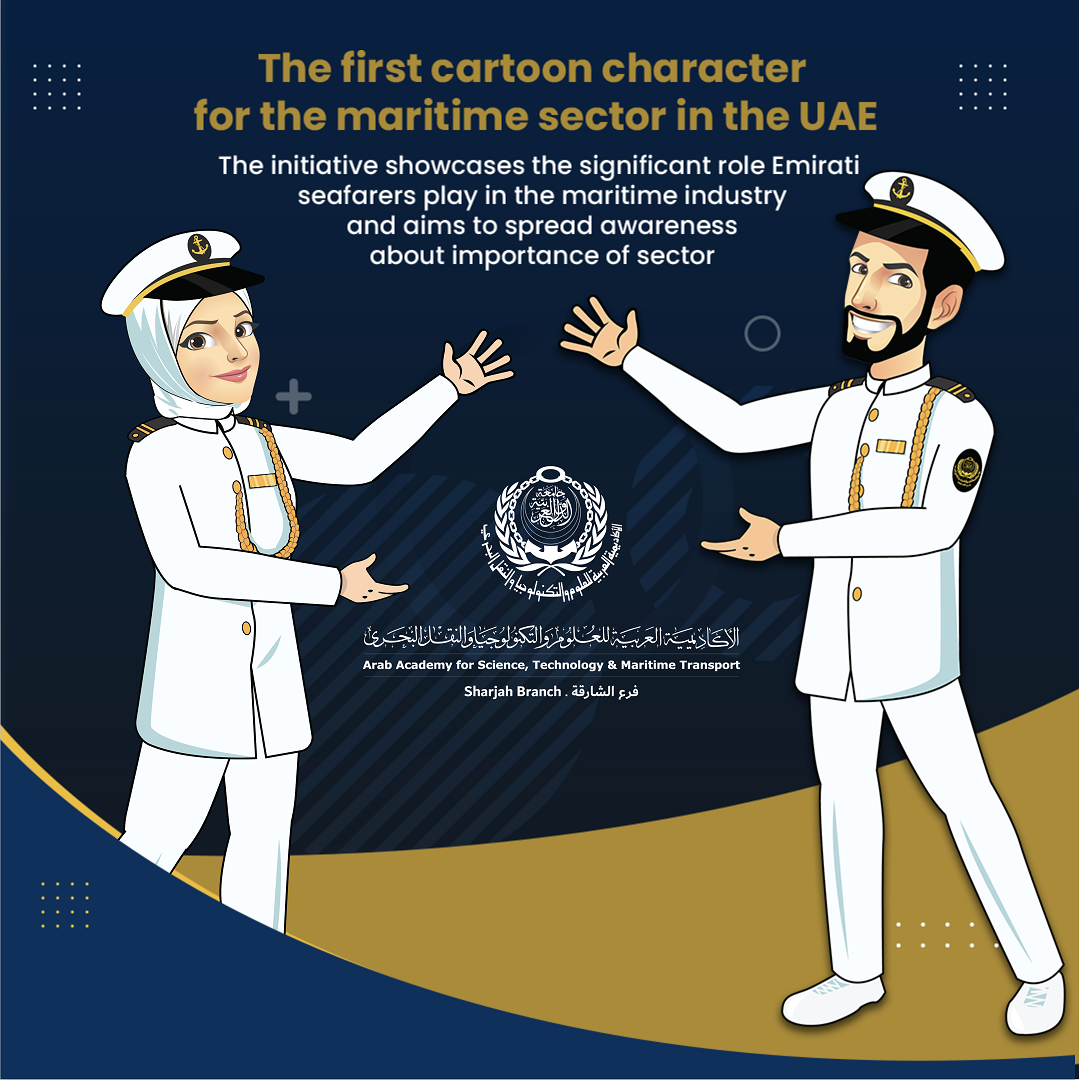 As part of its ongoing efforts to empower young Emiratis to join the maritime sector, the Arab Academy for Science, Technology and Maritime Transport Sharjah Branch (AASTS), has launched an Emirati cartoon character for the maritime sector. Through this innovative media awareness initiative, the first of its kind by a maritime academy in the Middle East, AASTS aims to raise awareness among the youth about the various educational and professional opportunities in the maritime sector. This supports the Academy’s effort to attract more students to enroll in marine specialties to supply the market with competent professionals, fulfilling the need for more Emiratis in the maritime sector. The initiative supports the agreements between AASTS and a number of government organisations including the Ministry of Energy and Infrastructure in the UAE and the Ministry of Climate Change and Environment (MOCCAE).

Motivating the youth to join the maritime sector

Commenting on the initiative, His Excellency Dr. Ismail Abdel Ghaffar Ismail Farag, President of the Arab Academy for Science, Technology and Maritime Transport, said, “We have learnt from our extensive experience in providing quality educational and academic services, that the early years of education are ideal for instilling concepts and ideas that can change people’s behaviour. That’s why, we thought outside the box and decided to address this segment using the means and tools they like the most. Launching this cartoon character is part of a comprehensive plan that features other characters as well as promotional content about the maritime sector targeting young people. The plan makes use of social media and other content platforms, which young people use the most. This enables us to make a positive impact and motivate the younger generations to join the maritime sector, which is very important for the future of Arab countries."

Her Excellency Eng. Hessa Al Malek, Advisor to the Minister for Maritime Transport Affairs, UAE Ministry of Energy and Infrastructure, affirmed the support of the maritime transport sector in the Ministry for the media campaign that will be based on the cartoon character. She explained that this innovative approach will have a significant impact on motivating students to join the maritime sector as it is one of the fields that is in a great need for Emirati competencies. It offers good remuneration and benefits compared to other jobs. Her Excellency noted that this media campaign will be included in the UAE's nomination portfolio for re-election to the membership of the Executive Office of the International Maritime Organisation - Category B, as it underlines the importance the UAE attaches to spreading awareness about the maritime industry among the general public.

She added, "For us in the UAE, the sea is more than just ports and international trade. It is a major part of our culture, national identity and authentic heritage. Before oil was discovered, the sea was the source of livelihood and wealth for us and it continues to be a sustainable resource that ensures a comfortable life and a prosperous economy for future generations. That’s why we have to do everything we can to develop the maritime economy. We are proud of what has been achieved today in this regard. The UAE is one of the best global maritime hubs with some of the largest and most advanced ports in the Middle East in terms of infrastructure and digital systems. The local maritime sector’s annual turnover exceeds USD60 billion. Additionally, the UAE is home to more than 20,000 maritime organisations and companies and over 21,000 ships docking in the UAE ports each year, carrying over 17 million containers to and from the country.”

Reviving the image of Emirati seafarers

Her Excellency said that despite all these achievements, there are still great opportunities for development. The UAE cannot depend on foreign professionals forever if it wants the maritime sector to have a pivotal role in its future economic development. It must build its capabilities by making use of qualified Emiratis. Here comes the Ministry’s partnership with the Arab Academy for Science, Technology and Maritime Transport  Sharjah Branch to be the national academic and educational arm. It was necessary to launch an intensive media campaign to raise awareness among young people. Launching this cartoon character is a first step on the path to spread the sea culture and revive the image of Emirati seafarers.

His Excellency Sultan Alwan, Acting Undersecretary at the Ministry of Climate Change and Environment, said: “The global marine environment is under enormous pressure due to habitat destruction, overfishing, pollution, and now climate change. To mitigate the impacts of these challenges on the local waters, the UAE works relentlessly to preserve its marine environment for future generations – protecting marine biodiversity, reducing carbon footprint, cutting down on plastic pollution, conserving blue carbon ecosystems, and driving the transition to a sustainable blue economy.”

He added: “To advance these efforts and ensure their success, MOCCAE is keen to build synergies with all relevant stakeholders from the government, the private sector, and academia. We are also committed to engaging the youth in addressing environmental challenges. In this context, we applaud AASTS’s initiative that will raise awareness about the importance of protecting the marine environment among the young generation and the general public.”

Commenting on how the character will be effectively used, Dr. Capt. Ahmed Youssef, Associate Dean, College of Maritime Transport and Technology, AASTS, said, “The cartoon character will be first used in the media campaign to promote student registration for the upcoming academic semester that ends in December. We are currently designing a cartoon character for a female student, and other characters from the marine life of the UAE waters, in order to highlight our concern for the environment. We have not yet given names to these characters as we intend to launch a campaign to ask the public for their suggestions. We will also use these characters to develop an interactive virtual assistant that guides visitors to the Academy and its website and assists them in understanding more about our educational and administrative services. Preparations are currently underway to launch joint campaigns with leading educational institutions to use these characters in artistic and school activities, as well as to launch illustrated and animated stories.”