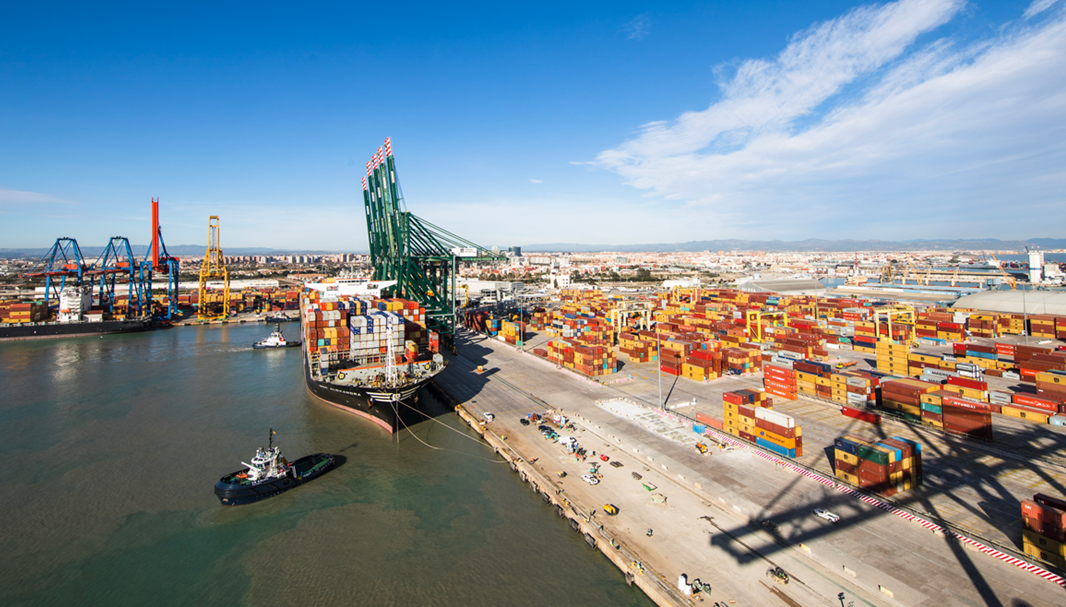 The solar paving is located on the north dock of the Port of València and can be used both in pedestrian areas and in areas of occasional traffic.

Innovation and sustainability, two priority axes in the Valenciaport 2030 strategy, zero emissions, come together in this project which places the Port Authority of Valencia as a benchmark in decarbonisation and SmartPorts.

The project, implemented by the start-up Solum, is part of the SuperLabPorts initiative and is co-financed by the Valenciaport Foundation with the support of the PAV within the framework of the EIT Climate-KIC Accelerator.

Solar panels installed on the ground, walkable by pedestrians and vehicles, an adaptable pavement to be placed on any plot of land, connected with photovoltaic modules and wiring to carry the energy to the grid. A pioneering project in a port area which has been presented yesterday at the Port of Valencia and which places it at the forefront of innovation and sustainability in its Valenciaport 2030 strategy, zero emissions. In addition, this initiative opens the door to taking advantage of the large port spaces to generate solar energy and positions Valenciaport as a benchmark in SmartPorts.

Specifically, a total of 24 passable solar tiles have been installed on the north dock of the Port of Valencia with a power of more than 1 kWp in just six square metres of surface area, with an energy production equivalent to half the annual consumption of a three-person household, which will avoid emitting 5.7 tonnes of CO2 per year. A pilot project that provides an innovative solution in the field of sustainability in the maritime-port sector, and which serves to test the production of electrical energy in open-air conditions, exposed to the effects of salinity and other atmospheric factors. “It is one more of the bets that we are developing in Valenciaport in cutting-edge technological proposals that provide the site with green and clean energy in our commitment to decarbonisation, while we support entrepreneurship to act as a catalyst for innovation that generates new businesses and opportunities for young talent,” explained Federico Torres, head of Ecological Transition of the Port Authority of Valencia.

“This type of sustainable innovative solutions are a reality of Valenciaport’s conviction to be a catalyst for driving initiatives that accelerate their implementation in different areas. In this case, it helps us to analyse the production capacity and the sites where it can be installed, such as the accesses to buildings or the new passenger terminal. In addition, it shows our responsibility with the front line in the fight against climate change”, adds Federico Torres. He recalled other projects such as H2PORTS, included in the Spanish Government’s Hydrogen Roadmap, which will make the Port of Valencia the first in Europe to use vehicles and port machinery powered by hydrogen fuel cells. Along these lines, Valenciaport is also making progress in the installation of solar roofs in Valencia and Gandia, the installation of a wind power plant and the electrification of the docks of the Port of València.

The use of solar paving in the Port of Valencia has been developed by SOLUM, one of the start-ups selected by the Port Authority of Valencia (PAV) and the Valenciaport Foundation within the framework of the EIT Climate-KIC Accelerator, which responded to the challenge launched by Valenciaport on innovation in photovoltaic installations in ports and which, on reaching phase 3 of the accelerator, has received financial support of 30,000 euros.

The general manager of the Valenciaport Foundation, Antonio Torregrosa, explained that “one of the main aims of this initiative is to attract talent to the logistics-port sector by applying a strategy of open innovation in the Port of Valencia, in alignment with one of the main demonstrators in the new EIT Climate-KIC strategy (Deep Demonstration Net-Zero-Emissions for Resilient Maritime Hubs), where the co-design of innovative solutions of the actors involved can be developed and implemented in the port area, thus contributing to reach its challenge of zero net emissions in 2030”.

For his part, SOLUM’s Director of Product and Innovation, Luis Muñoz, indicated that “this solar floor is 100% walkable with a design integrated into the urban architecture that guarantees anti-slip, with regenerative properties and a greater resistance than concrete that makes it resistant to loads, impacts and scratches. The system generates clean energy thanks to the high-efficiency photovoltaic cells integrated in its interior”.

This innovative photovoltaic solution can be installed both in pedestrian areas and in areas with occasional traffic. These solar panels are much more resistant to erosion and easy maintenance and, in a place like the Port of Valencia, they also have the advantage of being able to produce energy in areas where a panel could not be installed.

This project is part of #SuperLabPorts, a space of international projection designed and conceived for innovation and entrepreneurship in the maritime and port sector in the field of climate change, promoted by the PAV, the Valenciaport Foundation and EIT Climate-KIC (the Climate Change Innovation Centre) – which has been set up by the European Institute of Innovation and Technology – whose main mission is to promote the development of a low-carbon economy with the aim of facilitating actions to adapt to and mitigate climate change.

“Horchata” to enjoy the views

During the presentation, and as a detail to those present, this solar pavement, installed on the balcony of the north dyke of the extension, has supplied energy to a mobile service of horchata Denominación de Origen Chufa de València, as an example of what the plates can produce on a small scale. The installation has been placed next to the solar panels, on top of which the event was held, on the balcony of the north dock, which allows a view of the north and south beaches and the whole of the port area.