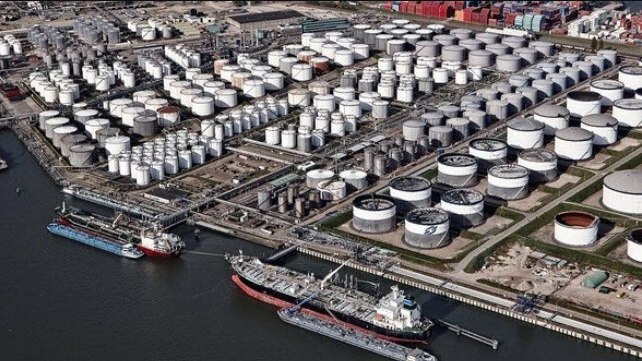 Planning is getting underway to develop a hydrogen terminal at the Port of Rotterdam that can be a central import location for ammonia as a hydrogen carrier as well as the distribution for the alternative fuel. The project is being developed by bulk terminal operator HES International, Vopak which operates tank farms including ammonia terminals, and Dutch energy network operator Gasunie with a goal of beginning operations by 2026.

In addition to the production of green hydrogen in the Netherlands, the partners highlight that there will also be demand in Northwestern Europe for the large-scale import of green hydrogen, to meet future demand. They believe that demand for green hydrogen will grow in the energy sector, the transport sector, and the petrochemical industry both in the Netherlands and Germany, and that an import terminal for green ammonia will be a vital part of a hydrogen infrastructure designed to meet the emerging needs.

They point out that green ammonia is immediately usable as CO2-free fuel for example for shipping or as a raw material for example for the production of fertilizer. It is also easily created by reacting hydrogen with nitrogen forms allowing the hydrogen to be efficiently and safely transported in large volumes, stored, and converted again to hydrogen.

They have selected a strategic location on Rotterdam’s Maasvlakte where vessels from all over the world can moor to discharge ammonia products while also using the existing infrastructure and the logistic facilities of the Port of Rotterdam. They said that the site also offers space for the development of an installation for converting ammonia into hydrogen and in the future, could be connected to the national hydrogen network planned by Gasunie. Through the distribution network, the ammonia or hydrogen could be distributed both in the Netherlands and broader in Northern Europe. The service proposition will entail an independent open-access terminal infrastructure, in which the partners will not own the green ammonia.

HES currently operates at a location in Maasvlakte with quayside capacity and direct access from the sea. Gasunie also has existing infrastructure of storage tanks and a system of pipelines. Vopak, with six ammonia terminals around the world, has extensive experience in the safe storage of ammonia.

The companies have agreed to work together to develop the import terminal for green ammonia as a hydrogen carrier. Basic design work is expected to begin this quarter and the eventual investment decision will be taken based on elements including customer contracts and the availability of the necessary permits.